Leonard Cohen – Dance Me To The End Of Love, piano solo sheet music

(Montreal, 1934 – Los Angeles, 2016) Canadian writer, composer and singer. Considered a fundamental figure of the American folk of the sixties and seventies, his songs, which stood out particularly for the strength and literary quality of his lyrics, reinforced by expressive melodies, influenced the majority of contemporary singer-songwriters. 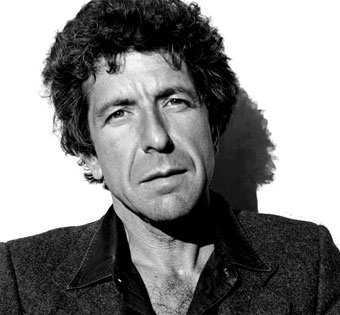 His vocation led him in the beginning to literature. He published novels such as The Favorite Game (1963) and The Beautiful Vanquished (1966), but from a very young age he admired the verses of authors such as WB Yeats, Walt Whitman or Federico García Lorca and certainly his favorite genre was always poetry.

Although literature seemed to be his main center of interest, around 1966 his presence on the stages of folk clubs in the New York neighborhood of Greenwich Village began to be common.

He began his musical career with the help of Juddy Collins, who introduced the then promising writer and poet to music circles. Collins’ 1966 version of his song Suzanne (published as a poem within the book Parasites of Paradise ) would reinforce the already existing interest in Cohen’s complex personality, which almost forced him to make his recording debut in January 1968.

But he was to being John Hammond (famous talent scout for the CBS label, to which he attracted figures such as Aretha Franklin , Bob Dylan or Bruce Springsteen ) who was ultimately responsible for Cohen’s transition to music, after seeing the Canadian perform at the Newport Folk Festival in 1966.

His first album was simply titled Songs of Leonard Cohen (Songs of Leonard Cohen, 1968). His minimal production was undoubtedly a success on this album, practically reduced to the presence of Leonard’s voice and guitar, which highlighted the interest of the lyrics. In any case, this first work immediately placed Cohen in the forefront of the singer-songwriters of the time.

The intimate content of the texts made it very clear from the first moment his progressive position on and off stage. Since then, the Canadian singer-songwriter, always oblivious to commercial approaches and large promotional campaigns, would combine literature, composition and recording of new songs and live performances with the same interest and rigor.

His second album, Songs from a room (1969), continued in the same vein and elevated the singer-songwriter to the rank of leader of a generation of musicians interested in folk. His performance at the 1970 Wight Festival and subsequent European tour expanded his following outside of Canada and the United States and helped Cohen discover the Greek island of Hydra, which he would make a favorite spot for his newspapers. withdrawals. 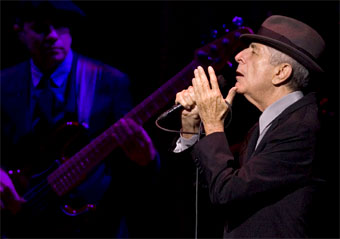 Already in the seventies, his record production began to become more sophisticated with regard to the arrangements of the themes contained in his albums, maintaining, however, the same initial coherence in the lyrics of his songs. In 1971 she published Songs of love and hate (Songs of love and hate) and in 1973 the live album entitled Live Songs . Both anticipated the popular success that would reach New skin for the old ceremony (New skin for the old ceremony, 1974).

After the publication of Greatest Hits in 1977, there was talk of a definitive withdrawal of Leonard Cohen from music, but the rumor was immediately debunked with the release of Death of a Lady (1977), produced by Phil Specter. The recording of this new work took place in an environment of constant tension between Spector and Cohen, who maintained strong discrepancies in the arrangements of each song, a fact that harmed the final result. Perhaps for this reason, the Canadian singer-songwriter would return to his roots in Recent songs (Recent songs, 1979).

The emergence of new musical currents at the end of the seventies, such as Punk and New Wave, seemed to displace Leonard Cohen from the forefront of today. But Cohen, always oblivious to fashion, also dedicated himself to continuing to write songs and to write, star in and direct the short film I am a hotel , which would win the Grand Prize at the Montreaux International Television Festival in Switzerland.

Months later, in 1985, he published Various positions , an album that showed a very updated Leonard Cohen in the arrangements of his songs. Winner that same year of a Canadian Award (shared with Lewis Furey) for the music of the Opera-Rock Night Magic , in 1988 he regained the heights of his former popularity with the album I’m your man (I’m your man), best-selling to both sides of the Atlantic.

His subsequent works, such as The future (The future, 1992), continued to demonstrate a high level of creativity, in a line of work that, despite its stylistic evolution, maintains the constants and essences of its beginnings, the same ones that made it in the great lyricist and composer of the seventies. His songs have been covered by the most important artists of the moment (Joe Cocker and his version of Chelsea Hotel is the most remembered example).

After the presentation tour of his new work, Cohen retired to a Zen monastery in San Diego (California), where he would remain for six years. After nine years of creative silence, the singer-songwriter returned to the music scene in 2001 to present the twenty-third album of his career, which was released with the brief title of Ten new songs (Ten new songs). Dear heather (2004), Old ideas (2012), Popular problems (2014) and You want it darker (2016) were the last titles in his discography.

Cohen was more popular as a singer-songwriter than as a poet, but, paradoxically, the latter facet was more recognized than the former. As a singer, he received the Crystal Globe in 1988 for having sold five million records outside the United States.

In 1991, he entered the Musicians’ Hall of Fame in Toronto (Canada) and received the Juno Award for Songwriter of the Year. In 1993, he was awarded the Juno for best male singer of the year. However, in literature, the list of awards garnered is almost endless; He received two honorary from Dalhousie (1970) and McGill (1992) universities, and in 2011 he received the Prince of Asturias Award for Letters.